The good news is that the economy is recovering strongly, the bad news is that housing supply continues to lag and that is a significant issue.

On December 7, NH Housing presented an online webinar, Economy 2022: Growing or Slowing, with economist Elliot Eisenberg, PhD. Eisenberg is a former economist for the National Homebuilders Association and currently works as a consultant and writes a daily saving blog on a range of economics-related topics.

According to Eisenberg, the COVID-19 pandemic has caused a recession unprecedented in recent memory. While it took years to recover from the dot.com crash and recession of 2008, this time the economy rebounded almost immediately. The national unemployment rate has fallen to 4%, productivity is up, GDP is growing and the stock market is doing well.

But not everything recovered so quickly. As the pandemic circled the globe, it caused disruptions in the manufacturing and flow of goods and materials, and created shortages of consumer goods. These supply chain issues caused shortages and price increases that led to inflation.

The pandemic has also caused significant changes in consumer behavior. People continued to work and collect paychecks, but were unable to spend money on travel or entertainment. This, combined with stimulus checks, has led to a significant increase in savings.

Additionally, during the pandemic, many people have shifted to working from home. Without needing to be close to the office, some workers began to move away from the city proper and into the suburbs and nearby rural areas. This led to a boom in home sales.

And although many people across the country have moved, most have not moved far. Ben Frost, general manager of policy and public affairs for New Hampshire Housing, said that’s also true for New Hampshire.

“While we heard a lot about an increase in buyers from Massachusetts, we found that most buyers were already here in New Hampshire. However, there has been a modest but statistically significant increase in home buyers from elsewhere,” Frost said. 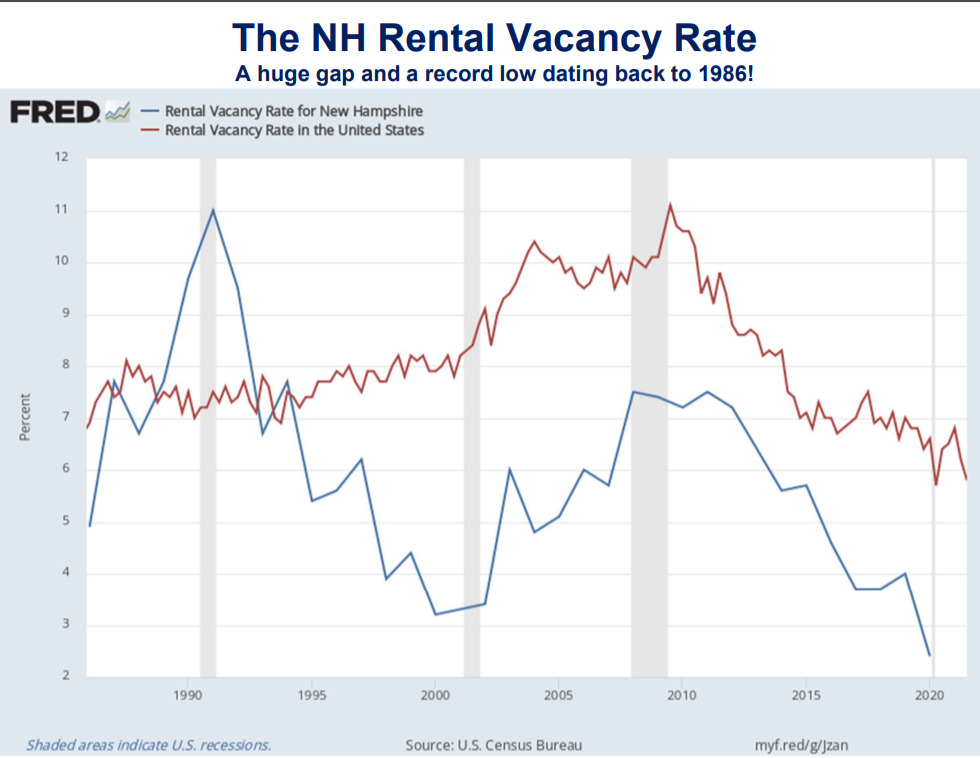 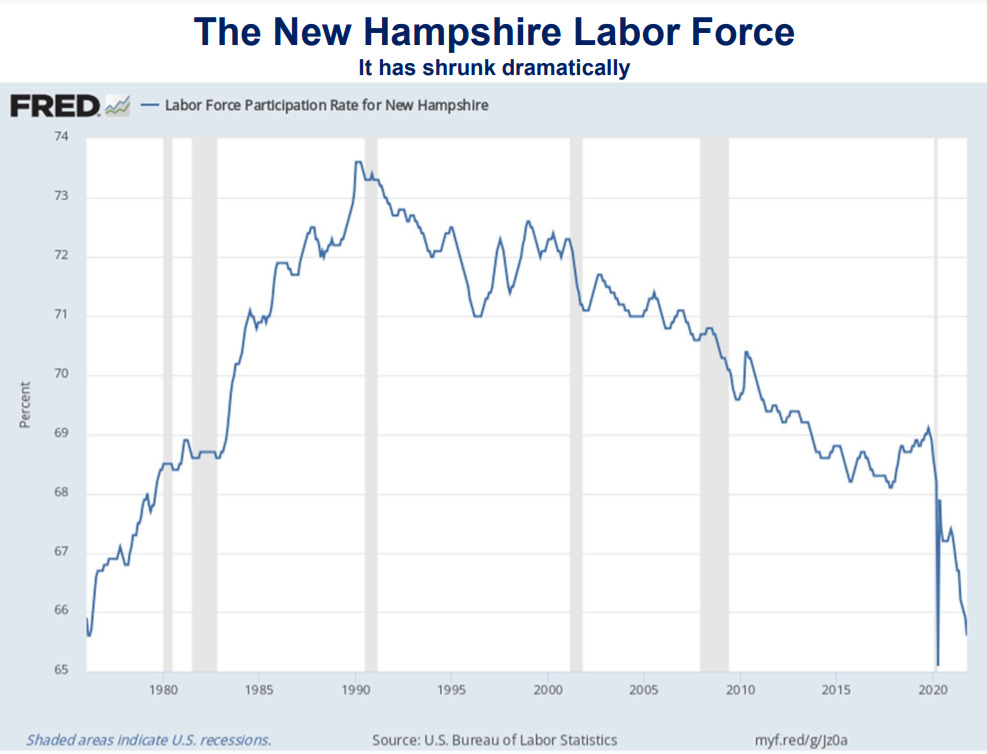 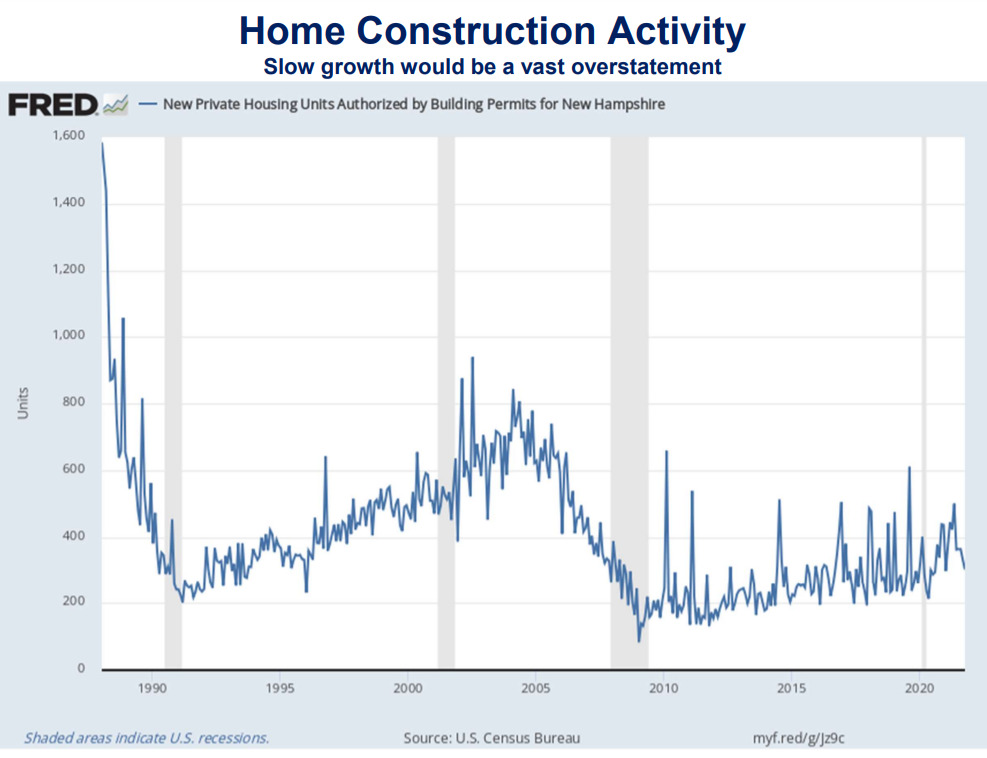 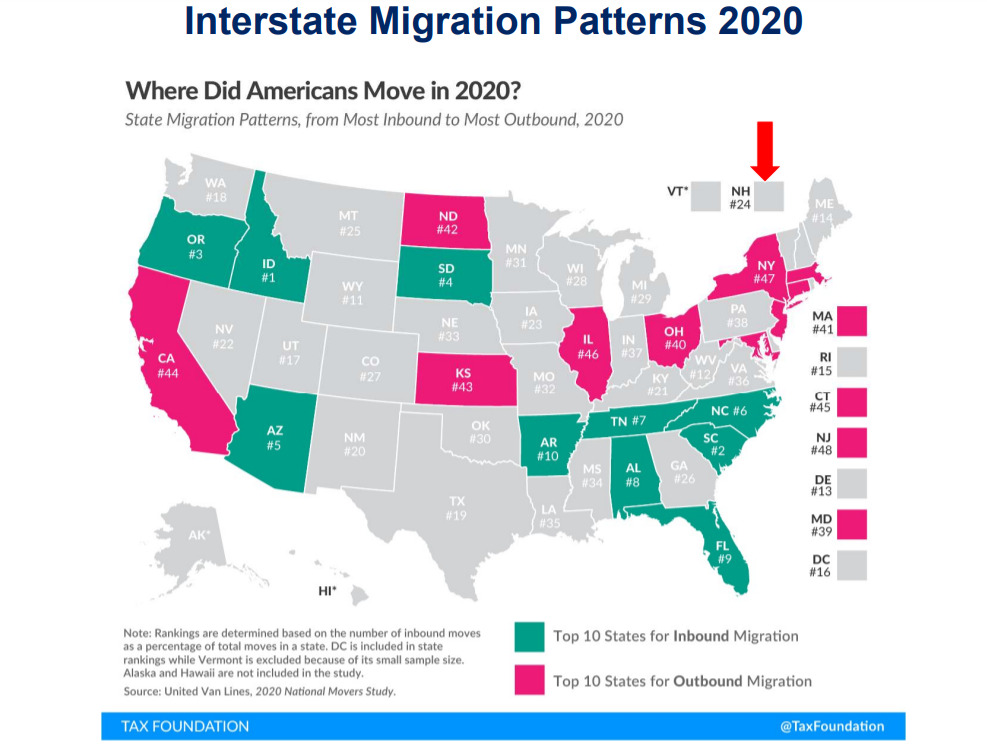 The low inventory of homes on the market, combined with increased demand, has resulted in soaring home selling prices. According to Frost, the average home price in New Hampshire is currently $375,000, down from a peak of $410,000 in August 2021.

Eisenberg noted that there is a deficit of 3 to 4 million units nationwide, and that inventory has been shrinking over the past decade. Most of the current real estate market centers on the resale of existing homes. “There are no new homes to buy,” he said.

Two sectors of the economy that continue to lag create significant challenges for builders and developers looking to build new homes. Supply chain issues have led to shortages or significant cost increases of building materials such as lumber, shingles, nails, and even appliances.

Second, many people have left the workforce, which has made it difficult to obtain the labor needed to build new homes, and many of the people who work in these trades are currently busy with projects renovation of existing houses.

Eisenberg also notes that 10 years ago 40% of new home construction was entry-level homes, now it’s virtually zero. This will have long term ramifications as millennials reach home buying age and have nothing to buy.

The state rental market also remains difficult. Across the country, rents are up 3.1%. Housing costs represent 20-30% of the consumer price index and can contribute to inflation. Vacancy rates remain very low, making it difficult to find accommodation and contributing to rising costs.

Even with that, Eisenberg is optimistic about the future. As long as the COVID-19 pandemic continues to fade and move into the endemic phase, he sees the economy continuing to recover. Sectors that have lagged, such as retail and restaurants, will gain strength, and rising wages will encourage more people to return to the workforce. He also sees continued improvement for small businesses.

The visual presentation of Eisenberg is below:

The supply of HOUSING in the capital will not improve for at least four years, believe a majority of professionals in the real estate sector. This is despite a sharp increase in the number of housing starts over the past year, as the construction sector accelerated construction. But the results of a survey released today […]

In the regional city of Townsville, a two-bedroom unit in the CBD could cost renters up to $570 per week. Key points: COVID has seen Townsville’s housing stock shrink as there is an excess of rentals in Melbourne Townsville’s vacancy rate is 0.7% Some estate agents think it’s too expensive to own an investment property […]

Leaders from Ginnie Mae and the Federal Housing Finance Agency gave hints about what’s in store for their organizations at the Mortgage Bankers Association conference this week. Following the announcement of the Biden Administration Housing Supply Initiativewhich mentions Ginnie Mae twice, its newly installed chairman said his company is receiving unprecedented attention from the White […]